Shares of TAKE-TWO INTERACTIVE SOFTWARE, INC (NASDAQ:TTWO) have been given an average recommendation of “Buy” by the thirty brokerages that are currently covering the company, Marketbeat.com reports. Ten analysts have rated the stock with a hold rating and nineteen have given a buy rating to the company. The average 12 month price target among brokers that have updated their coverage on the stock in the last year is $145.19.

TAKE-TWO INTERACTIVE SOFTWARE (NASDAQ:TTWO) last announced its quarterly earnings data on Wednesday, May 20th. The company reported $1.50 earnings per share for the quarter, topping the Thomson Reuters’ consensus estimate of $0.90 by $0.60. The firm had revenue of $729.42 million during the quarter, compared to analysts’ expectations of $585.27 million. TAKE-TWO INTERACTIVE SOFTWARE had a return on equity of 18.22% and a net margin of 13.09%. The company’s quarterly revenue was up 49.3% compared to the same quarter last year. During the same period in the previous year, the business posted $0.78 EPS. As a group, equities research analysts predict that TAKE-TWO INTERACTIVE SOFTWARE will post 2.52 earnings per share for the current year.

Take-Two Interactive Software, Inc develops, publishes, and markets interactive entertainment solutions for consumers worldwide. The company offers its products under the Rockstar Games and 2K labels, as well as under Private Division and Social Point labels. It develops and publishes action/adventure products under the Grand Theft Auto, Max Payne, Midnight Club, and Red Dead names through developing sequels; and offers downloadable episodes, content and virtual currency, and releasing titles for smartphones and tablets.

Recommended Story: What is Forex? 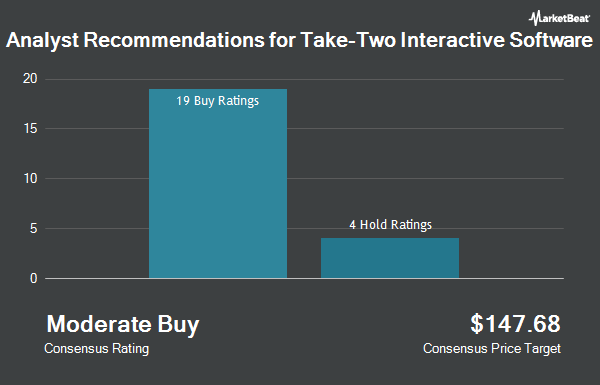 Complete the form below to receive the latest headlines and analysts' recommendations for TAKE-TWO INTERACTIVE SOFTWARE with our free daily email newsletter: