Conn’s Inc (NASDAQ:CONN) has received a consensus recommendation of “Hold” from the ten analysts that are currently covering the company, MarketBeat reports. Six equities research analysts have rated the stock with a hold rating and three have given a buy rating to the company. The average twelve-month price objective among analysts that have covered the stock in the last year is $18.10.

Conn’s (NASDAQ:CONN) last announced its quarterly earnings results on Tuesday, June 9th. The specialty retailer reported ($1.89) earnings per share (EPS) for the quarter, missing analysts’ consensus estimates of ($0.32) by ($1.57). The business had revenue of $317.20 million for the quarter, compared to the consensus estimate of $309.86 million. Conn’s had a negative net margin of 1.06% and a negative return on equity of 1.78%. The company’s revenue for the quarter was down 10.3% compared to the same quarter last year. During the same period in the previous year, the company earned $0.58 earnings per share. Sell-side analysts predict that Conn’s will post -1.61 EPS for the current fiscal year.

Conn's, Inc operates as a specialty retailer of durable consumer goods and related services in the United States. It operates through two segments, Retail and Credit. The company's stores offer furniture and mattress, including furniture and related accessories for the living room, dining room, and bedroom, as well as traditional and specialty mattresses; and home appliances, such as refrigerators, freezers, washers, dryers, dishwashers, and ranges.

Recommended Story: How to calculate the intrinsic value of a stock 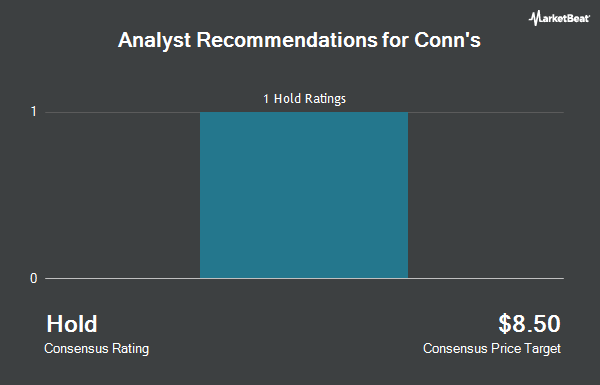 Receive News & Ratings for Conn's Daily - Enter your email address below to receive a concise daily summary of the latest news and analysts' ratings for Conn's and related companies with MarketBeat.com's FREE daily email newsletter.

Complete the form below to receive the latest headlines and analysts' recommendations for Conn's with our free daily email newsletter: