Analysts expect that Assembly Biosciences Inc (NASDAQ:ASMB) will announce $12.54 million in sales for the current fiscal quarter, according to Zacks. Four analysts have provided estimates for Assembly Biosciences’ earnings, with estimates ranging from $4.00 million to $36.04 million. Assembly Biosciences posted sales of $3.08 million during the same quarter last year, which would indicate a positive year-over-year growth rate of 307.1%. The business is scheduled to issue its next quarterly earnings results on Monday, August 3rd.

According to Zacks, analysts expect that Assembly Biosciences will report full year sales of $20.36 million for the current fiscal year, with estimates ranging from $10.21 million to $40.12 million. For the next financial year, analysts forecast that the company will post sales of $15.80 million, with estimates ranging from $14.00 million to $17.60 million. Zacks Investment Research’s sales averages are a mean average based on a survey of research analysts that cover Assembly Biosciences.

Assembly Biosciences (NASDAQ:ASMB) last issued its earnings results on Thursday, May 7th. The biopharmaceutical company reported ($0.76) earnings per share (EPS) for the quarter, topping the consensus estimate of ($0.98) by $0.22. The business had revenue of $4.08 million during the quarter, compared to analysts’ expectations of $3.82 million. Assembly Biosciences had a negative net margin of 601.75% and a negative return on equity of 45.43%.

In other Assembly Biosciences news, EVP Richard James Colonno sold 7,812 shares of the company’s stock in a transaction that occurred on Tuesday, March 31st. The shares were sold at an average price of $15.04, for a total transaction of $117,492.48. Following the completion of the sale, the executive vice president now directly owns 144,821 shares of the company’s stock, valued at $2,178,107.84. The sale was disclosed in a filing with the SEC, which can be accessed through this link. 12.42% of the stock is currently owned by corporate insiders.

Assembly Biosciences, Inc operates as a clinical-stage biotechnology company in the United States. The company develops oral therapeutic candidates for the treatment of hepatitis B virus (HBV) infection and novel class of oral synthetic live biotherapeutic candidates to treat disorders associated with the microbiome. 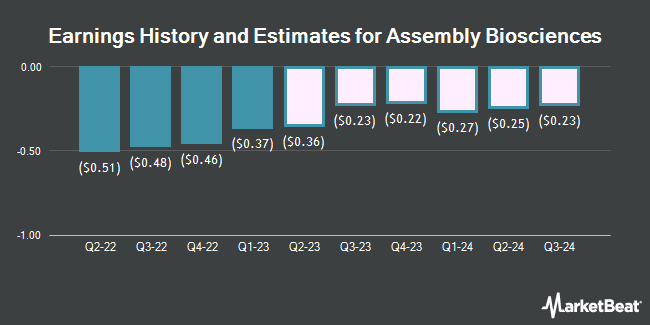 Complete the form below to receive the latest headlines and analysts' recommendations for Assembly Biosciences with our free daily email newsletter: