According to Zacks, analysts expect that Lattice Semiconductor will report full-year sales of $395.84 million for the current year, with estimates ranging from $390.20 million to $400.32 million. For the next fiscal year, analysts forecast that the business will report sales of $436.40 million, with estimates ranging from $428.70 million to $441.00 million. Zacks’ sales averages are an average based on a survey of research firms that cover Lattice Semiconductor.

Lattice Semiconductor (NASDAQ:LSCC) last announced its earnings results on Tuesday, April 28th. The semiconductor company reported $0.15 earnings per share (EPS) for the quarter, beating the Thomson Reuters’ consensus estimate of $0.14 by $0.01. Lattice Semiconductor had a return on equity of 20.60% and a net margin of 10.97%. The business had revenue of $97.32 million during the quarter, compared to analyst estimates of $98.29 million. During the same quarter in the previous year, the business earned $0.11 earnings per share. The company’s revenue for the quarter was down .8% compared to the same quarter last year.

In related news, VP Stephen Douglass sold 7,053 shares of the business’s stock in a transaction that occurred on Friday, May 1st. The shares were sold at an average price of $21.43, for a total value of $151,145.79. Following the completion of the transaction, the vice president now owns 31,284 shares of the company’s stock, valued at $670,416.12. The sale was disclosed in a legal filing with the Securities & Exchange Commission, which is accessible through this link. Insiders own 1.24% of the company’s stock.

Lattice Semiconductor Corporation, together with its subsidiaries, develops and sells semiconductor technologies in Asia, Europe, and the Americas. The company offers field programmable gate arrays that consist of five product family lines, including the ECP, MachXO, iCE40, CrossLink, and programmable mixed signal devices.

Featured Story: What is a closed-end mutual fund (CEF)? 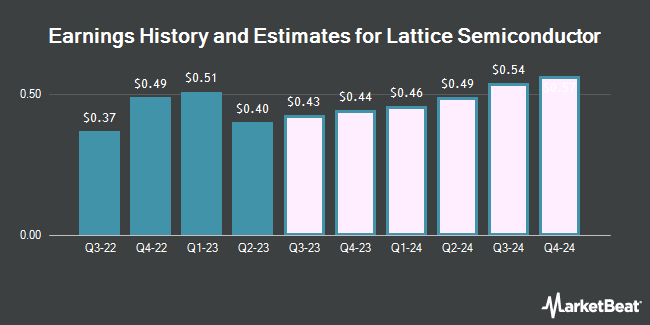 Complete the form below to receive the latest headlines and analysts' recommendations for Lattice Semiconductor with our free daily email newsletter: