Zacks Investment Research upgraded shares of Goodrich Petroleum (NYSEAMERICAN:GDP) from a sell rating to a hold rating in a report issued on Friday, Zacks.com reports.

According to Zacks, “Goodrich Petroleum Corporation is an exploration and production company. It engaged in the exploitation, development and production of natural gas and crude oil primarily in the Haynesville Shale in Northeast Texas and Northwest Louisiana, the Tuscaloosa Marine Shale in Eastern Louisiana and Southwestern Mississippi and the oil-window of the Eagle Ford Shale trend in South Texas. Goodrich Petroleum Corporation is based in Houston, Texas. “

Several other analysts also recently issued reports on GDP. Northland Securities reissued a buy rating and issued a $13.00 price target on shares of Goodrich Petroleum in a research report on Friday, November 8th. SunTrust Banks reduced their price target on shares of Goodrich Petroleum from $16.00 to $14.00 and set a buy rating for the company in a research report on Thursday, December 19th. One investment analyst has rated the stock with a hold rating and five have assigned a buy rating to the stock. The company has a consensus rating of Buy and an average price target of $13.38. 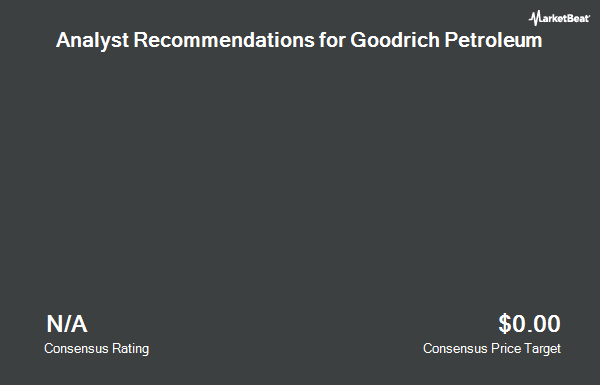 Complete the form below to receive the latest headlines and analysts' recommendations for Goodrich Petroleum with our free daily email newsletter: